California Domestic Workers Defend Dignity from Sacramento to the Streets

This 2017 is proving itself to be a year full of resistance. Beginning in January, just one day after the presidential inauguration, over 3.2 million people across the country joined the historic #WomensMarch. Every week since then, there have been marches and actions – meetings and Know Your Rights trainings. We’ve come together to defend our communities and organize for immigrants rights, women’s rights, LGBTQ rights and the human rights of all people–all of which have come under fire under this new administration. And, of course, the leadership and voices of domestic workers have been front and center.

California domestic workers joined our sisters in Washington D.C. and we’ve also stood at the frontline of local marches in cities across the state, lifting up our voices as one of the largest immigrant workforces in the country and as women impacted directly by the policies of the new administration.

The current political climate demands the resilience and leadership of immigrant women now more than ever.

The resistance continues from the streets to the halls of Sacramento.

This spring, we are excited to announce the Defending Dignity Platform: The California Domestic Workers Coalition’s 2017 Policy Priorities. The platform prioritizes new legislation that specifically impacts immigrant working women who represent the majority of domestic workers across the state. The CDWC has adopted positions on the following bills to uplift the voices of domestic workers on these issues that most impact them and their communities. 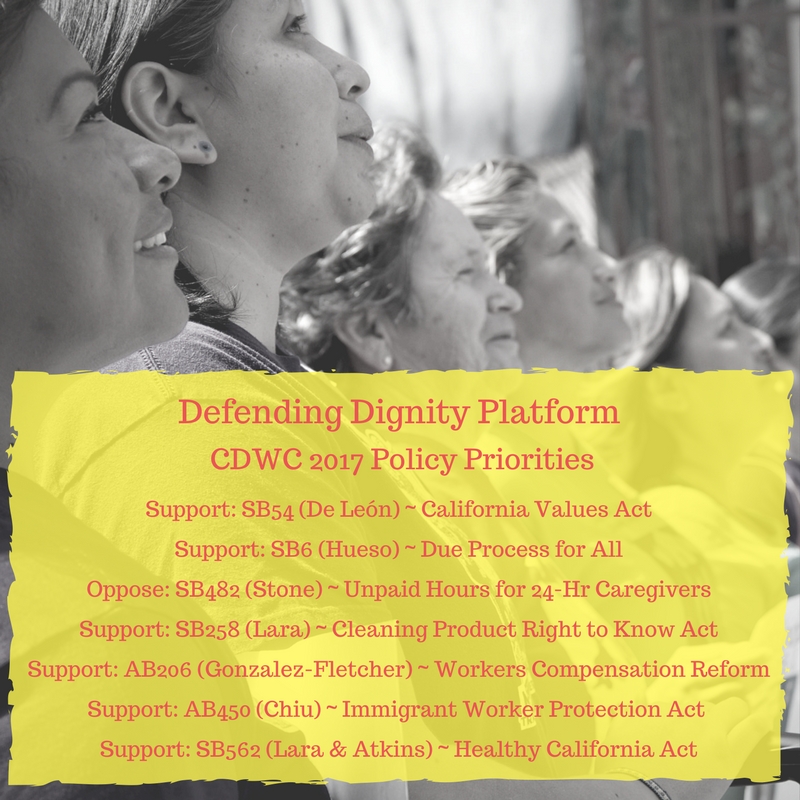 In a political moment in which working-class immigrant communities are facing attacks and scapegoating across the country, we must rise above the fear, unite to protect and assert our rights and advance an agenda that defends the dignity and well being of our families.